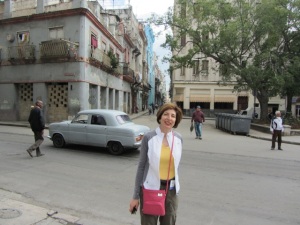 The swimming pool on the roof of the Parque Central Hotel in Havana, Cuba looked clear and inviting. Quenching my thirst with a welcome cocktail, Cuba’s signature drink, a mojito made of freshly crushed mint leaves, soda water, sugar, lime juice and rum. I imagined taking a dip in the pool one morning or late afternoon, relaxing after a hectic day of sightseeing. But that never happened. Although I was told to pack my swimsuit, there never was time for a swim or much leisure, because Americans are not allowed to visit Cuba as tourists. The only way to visit our nearest neighboring country to the south of Key West, Florida is to visit as a member of a People to People exchange, a tour licensed and approved by the Office of Foreign Assets Control(OFAC). Each member of our group, which numbered 18, was required to sign a statement that we would fully participate in all scheduled activities. Our programmed activities began around 9:00 a.m. and continued through the afternoon, with just enough break time at the end of the day for a quick shower and change of clothes before dinner. The pool didn’t open until 9:00 a.m.

I was traveling with the University of California, Santa Barbara alumni association on a “Gaucho Getaway”. I was also one of three actual UCSB alumni in our traveling group because you don’t have to actually be an alumnus to participate and it was such an intriguing trip, participants signed up from both coasts. I am old enough to remember watching I Love Lucy re-runs on T.V. and the fiery Ricky Riccardo directing his band and playing his congo drums. I also remember hearing stories from my parent’s generation of trips to Havana, the gambling, prostitutes, exotic nightclubs, and flavorful Cuban cigars. What remnants of the old Cuba still existed and how had it changed? I wanted to find out.

Although I had my trepidations about going on a tour with an organized group, it turned out it was a great group to travel with. Everyone was interested in learning about Cuba and respectful of each other, as fellow travelers. Despite the fact that we all rode together on a large (made in Korea) tour bus and were herded around from place to place, initially labeled by our name badges with cameras in hand, we were too absorbed by the sights and sounds, fascinated by the people we met, to be self-conscious. At least I wasn’t. I forgot to be embarrassed of being an ugly American. All the tour guides at the various places we visited seemed so happy to see us. Tourism (even if we were not officially tourists) is the primary source of economic stimulus to the Cuban economy. People from around the globe, countries that include: Germany, England, France, Canada, Japan, Spain, Mexico, Venezuela, Chile, Argentina, Russia, and China all come to vacation on this beautiful island located just 90 miles to our south. In mid February the temperature was in the mid 70’s and the sun shone brightly as it grew warmer each day during our 8 day visit.

Since the socialist revolution led by Fidel Castro in 1959 and the nationalization of previously held American assets in 1961, the United States government has maintained a strict trade embargo since 1962– the longest in history. Whereas once the United States provided a large market for Cuban sugar cane, sugar cane is no longer a large export. To acquire oil, the Cuban trade medical care with Venezuela. They send them doctors who work, courtesy of the Cuban government. Children in Cuba are required to go to school until age 16 and if they desire can attend universities and professional schools for free. After graduation, they will be assigned to a professional post for three years and then they are responsible for finding their own jobs.

Due to the ratio of doctors to citizens, we were told one doctor to every 40 families, life expectancy is age 78. Everyone receives a ration book for a subsistence amount of food they can purchase at specially stocked small stores, food that includes rice, beans,flour, cooking oil and a small amount of meat and vegetables. Supplies of powdered milk are limited to children and the elderly. While no one appears to be starving, the population looks quite lean and muscular. They work hard and they do a lot of walking. And those who do have cars, drive around in gorgeous vintage vehicles that make you feel as if you’ve stepped back in time to the 1950s.

How can those cars have lasted so long? How can they afford to drive those cars with their six and eight cylinder engines when gasoline in Cuba costs approximately $5 a gallon. My husband Peter finally figured it out, six days into our trip, when we stopped at a gas station on our way to the city of Trinidad. A car there was being repaired, the hood was up, and he looked inside. “Why it’s a diesel,” he exclaimed. “They’ve removed the old engine and replaced it with a 3 cylinder diesel probably from Eastern Europe. That’s how they keep them running.”
On that note I’ll end this particular entry with more to come on the specific topics of: Art and Artists, Architecture, Farming, and Entertainment.