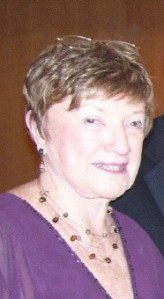 Carol Treiber died Tuesday after a well-fought battle against cancer. She was ___(this is where you usually write down age but Carol didn’t like to talk about her age, so I’ll just leave this blank). A leader in the Anne Arundel County community, Carol will long be remembered for her work as a volunteer, officer, and past- president of the Parole Rotary Club and as Executive Director of the Anne Arundel Arts Council (previously known as The Anne Arundel Arts Foundation).
I first met Carol in 1998, when I was appointed by former County Executive Janet Owens, to serve on the board of what was then titled The Anne Arundel Arts Foundation. Carol wasted no time in quickly ascertaining what talents I had to offer, and how to best make use of them. Within the span of a few weeks, I was writing news releases, designing brochures, attending lots and lots of arts events, and brainstorming on creating a video to publicize the arts. Carol was like that. She was good at putting people to work and getting things done, the mark of a good leader. It was with Carol’s encouragement that I signed up to participate in the 2001-2002 Leadership Anne Arundel Flagship Class. Carol was also a LAA graduate, not that she needed much help with leadership, but she was the kind of person who made use of any and all resources available.
At Rotary she did everything from parking cars at the Navy football games, to delivering dictionaries to elementary school students, to entertaining traveling dignitaries. Her high energy and devotion to hard work was contagious. She had definite ideas as to how things should be accomplished, and while you may not have always agreed with her, she was someone who commanded respect.
As Executive Director of the Arts Council, she fought hard for added funding and for collaboration and the sharing of resources between and within the various arts groups. She gave guidance and shared her expertise with all the arts groups, whether large or small, helping them to apply for grants, set up personnel procedures, and draw a larger audience. A devoted wife, mother, and grandmother, Carol was a big champion for bringing arts education into the schools and informing both public and private schools of grant opportunities and the availability of local artists to enrich curriculum.
Since Carol Treiber touched so many people’s lives, I’m sure, that readers have their own memories to share. That’s what blogs are for. The Arts Council Executive Committee has established a Carol Treiber Scholarship Fund to provide awards for organizations annually in her honor and you can get more information about that fund from A.A.Arts Council Executive Director April Nyman who shared the following Visitation and Service information: