The July 4th of my childhood featured fireworks. We watched them on the beach standing in damp sand. If the night was chilly we brought sweaters. In hot humid Maryland it is hard to imagine a cold July 4th night, but my family summered in New England, on Cape Cod.  And this was long ago, before global warming.

The firework display that flashed high above the harbor was spectacular and loud. Up past my bedtime I enviously watched the older children run around the beach setting off sparklers and rockets. Maybe I’d get some ice cream or hot cocoa when we returned to the cottage, if  I was good.

I was so enamored by fireworks, at age eight I requested one of my father’s oil paintings of fireworks be hung in my bedroom. During the school year in Baltimore,  I’d study the dark blue sky of that painting with the fragments of light and remember July fourth.

This year, 2020, the year of the Coronavirus, local municipalities are refraining from firework displays. Wisely they are discouraging large gatherings. I still hear loud noises, have heard them all week long. Individuals have been setting off fireworks, insistent on having some fourth of July fun. Their fun continued into the night on July 4th with fireworks being shot into the sky by private citizens all over the city.

July 3rd, a few residents of the neighborhood gathered at the park for a Happy Hour. Dutifully they stood six feet apart. Early in the morning, folks have been going out on their paddle boards or kayaks, to feel a slight breeze before the day grows too hot for exercise. 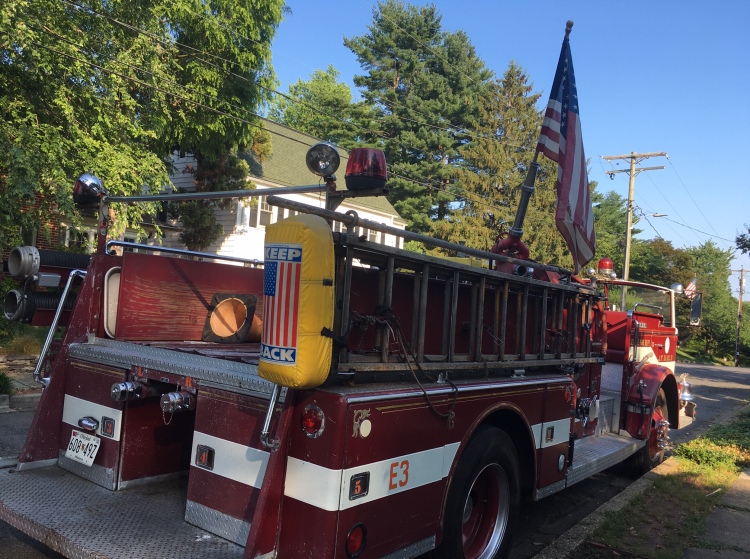 No parades.  The antique fire truck parked a few blocks away is all dressed up but has not place to go.  Signs are posted throughout my neighborhood. The yearly Murray Hill bicycle parade has been canceled.  Previous summers, children would decorate their bicycles and wagons. They’d proudly show off their handiwork and parents would stand on the sidewalk to cheer and clap.  But this year in Annapolis, capital of Maryland, there was no July 4th parade featuring local politicians, floats with hula dancers,  fire engines, candy tossed to waiting children, soldiers marching, bugles and drums.

There was mural painting. The nonprofit organization Future History Now, founded by artists Jeff Huntington and Julia Gibb promotes public art, often for social change. Joining together with the Maryland Commission on African-American History and Culture and the Banneker-Douglas Museum, a mural was painted on the basketball courts at Chambers Park in Annapolis to remember Breonna Taylor, killed by police in Louisville Kentucky in March.  The  words “Black Lives Matter” is part of the murals’ design. The powerful 7000 square foot statement was created by a team of volunteers.

The morning of July 4th, my husband and I focused on gardening. We pulled out a lot of weeds. He went for a bicycle ride. I made sweet potato salad to eat with our grilled piece of salmon.  It was possible to watch fireworks on TV, the firework display over The Washington D.C.  Capital. Even imagining that event, I worried for those who would be foolish enough to risk their health to stand or sit amidst a large crowd.  Am I being overly cautious? Perhaps I read too much about how little we know about the long lasting effects of this mysterious virus. Its spread in the United States makes me think of an out-of-control forest fire, ravaging and scorching the earth as it travels. But you can smell a fire’s approach and feel the sting of smoke in your eyes.

July 4th is a day for remembering. We remember those who have fought for freedom and for social justice.  We remember what democracy is supposed to mean. “All Men Are Created Equal.”