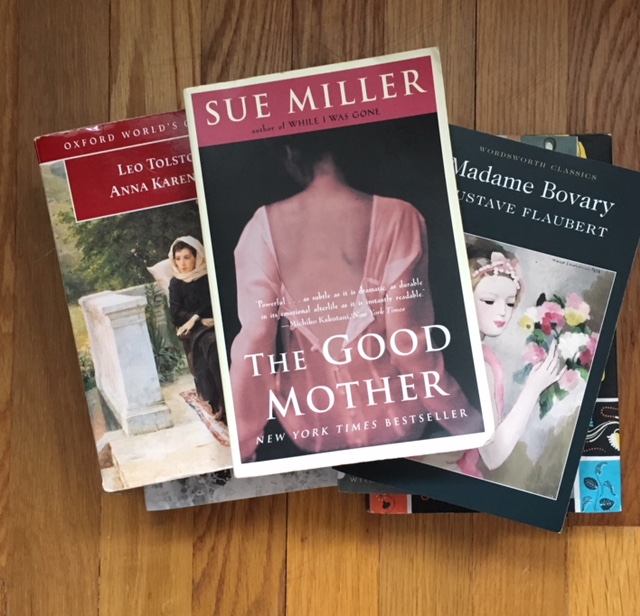 Intently reading the final chapters of The Good Mother by Sue Miller, while standing in line to board my Southwest Airlines flight back from Boston to Baltimore, I  bent down to retrieve my bookmark that had slipped onto the ground and sensed the woman standing next to me was glaring at me in disdain.  Did I do something wrong? Was I standing too close?

“How can you stand to read that book?” she said.

I looked up from my book into her face. I judged her to be between the age of sixty and seventy.  “What do you mean?” I said.

“Well she was obviously such a bad mother. I couldn’t stand it. You know you get to a certain age, and you decide I’m not going to keep reading something I don’t enjoy.”

“The protagonist did make a number of poor choices. But that’s part of the premise and the plot. She was flawed. She had unresolved issues with her own mother. “

“Yes. but she was just a bad mother. I raised a family and I know what it takes. She wasn’t fit to care for her child. I didn’t want to waste my time reading it.”

Over the intercom, our boarding group was called and we walked forward. I was following my husband who carrying our shared suitcase. He was wearing earphones and absorbed in listening to a book on tape, Killers of the Flower Moon,  oblivious to the conversation I’d been having. The woman followed behind me.

As we approached the gate and there was a pause. I didn’t want this woman to have the last word.  I turned and said, “Well actually, I’m in a Master’s program and I’m reading this book from an analytic viewpoint for craft .”

“Oh well that explains it. You have to read it.”

At this point I didn’t want to admit that the book had been my choice.  My mentor Elizabeth Searle at Stonecoast ( University of Southern Maine)  had suggested I read something by Sue Miller—perhaps Family Pictures— and I’d decided that Good Mother dealt more closely with the issues of a woman’s identity in the 1980’s, which would be helpful with my creative work, my own novel currently underway.    One of the conflicts between the protagonist Anna Dunlap and her ex-husband was their different family backgrounds and choices they make to obtain what they think is important.  In her past Anna defines herself through her marriage, but she wants to be independent.

A woman with  low self- esteem, her role as a mother was her affirmation that she could do something well.  But then she fell in love.  Her ability to receive love healed her, but also made her more vulnerable.  Her love affair versus her role as a mother is how the book was marketed in 1986.

“Recently divorced, Anna Dunlap has two passionate attachments: her daughter, four-year-old Molly, and her lover Leo, the man who makes her feel beautiful—and sexual— for the first time. Swept away by happiness and passion, Anna feels she has everything she’s ever wanted.  Then come the shocking charges that would threaten her new “family”…that force her to prove she is a good mother.”

I try again to make my peace with this woman who is scrutinizing my reading choices. “The Good Mother was published in 1986. Social norms change from decade to decade. When did you read it?” I asked. “

“Oh, maybe five or six years after it came out.” she said.

“Well that was a long time ago,” I said, “Things have changed.”

“Well it’s not that different, is it?”

I followed my husband onto the airplane and squeezed into the middle seat. She walked on past us and sat a few rows further back.

I marveled to myself on how judgmental the woman had been, what did it matter to her what I was reading?   Then I reminded myself that not everyone reads books to learn something and that probably more people read books to be entertained. Why else are predictable romances where the protagonist always lives happily ever after and cozy mysteries where the crime is always neatly solved and no one but the initial murder victim gets hurt, so popular?

Some of the best books are sometimes a painful ordeal to read when we closely identify with the pain, suffering, and indignities of the characters. If we have the resilience to keep turning the pages we are often richly rewarded by the insights and perspective we gain.  All of us have our flaws, our challenge is become better versions of ourselves. So while my younger self might have told the lady who was so bothered by my reading choice that she was narrow minded bag of wind, I listened to her rant and wrote this essay.

Postscript: For my writer friends who want to know what I am reading this semester, here is my tentative list.

Angels by Denis Johnson  (family in a desperate situation)

House in Paris by Elizabeth Bowen (time and characterization)

Doting by Henry Green  (use of dialogue)

Ill Will by Dan Chaon  (multiple POV and timelines)

The parenthetical notes indicate what I was thinking when I put the book on the list. While MFA students have the option of doing an imitative annotation, meaning they might write something copying the style of the book being annotated, I’ve preferred to focus on the use of a specific craft element. In The Good Mother, I’ve noticed all the reviews that dwell on the emerging sexuality of the protagonist and the unfairness of the legal system. No one seems to want to write about Anna’s relationship with music and her piano, so that’s what I will be writing about in my annotation.

Read on and  write on.