“The Essential Herman Maril” is the title of the art show currently featured at  Acme Fine Art in Boston.  The exhibit of works selected by Gallery owners James Bennette and David Cowan provides the viewer with an opportunity to become acquainted with some of the subject themes important in my father’s life. . His career spanned from the 1930s until his death in 1986. There is the boat, the sea, construction in the city, a garden with clothes line, looking out through a kitchen window, and one of my favorites–a black rotary wall  telephone .  My father painted what he knew and what he saw; selectively reducing and refining figures and shapes to depict on the paper or canvas what he felt to be important.

My dad, who divided his time between Maryland and Cape Cod, did some traveling and he sketched when he traveled. Writers put their notes in a journal.  Herman’s notes took the shapes of trees, coastlines, people, and buildings.  He visited the Southwest, California, Mexico, Spain, Italy, and Portugal, but he never made it to Africa although he had a modest collection of African Art that he prized. In addition  to several masks and  locks from a Chief’s hut, there was a sculpture fetish that was said to have been caked in mud  and  containing a lion’s ear when Herman purchased it.. He admired the simple carved shapes of these treasures, which he displayed in the front hallway and living room of our home at a time when such objects were not particularly fashionable.

As a child in the days when there were only three or four television stations, I’d watch wildlife nature shows with my dad,   mesmerized by the images on the black and white TV. Expansive plains, tall grasses waving in the wind and the close-up of a hungry lion in pursuit of dinner, chasing a fast moving gazelle had us on the edge of our chairs. It was a shared time, just me an my father, and during my recent visit to East Africa I thought of him often, wishing he was with me to see the expansive plains, baoba trees,  lions, zebras, gazelles, giraffes, and wildebeests in person.

When I told my brother David Maril  I was going to Africa, he sent me a photograph of the bird sculpture Dad had painted in the oil painting below, “Artist Contemplating African Bird” now in the collection of  Adirondack Community College, originally acquired by his close friend the poet William Bronk, known to our family as Bill.

David  was hoping I might be able to identify the origin of the sculpture, if I saw something similar.While I saw many large handsome birds during our travels on the Wami river and on our safari excursions overland by jeep inside Ngoronguru Crater and Masai Mara National Reserve, I saw no original pieces of bird sculpture during my visit. Walking in and out of all the tourist shops that line the narrow streets of the Stone Town portion of Zanzibar I mostly encountered the usual wood carvings I suspect are probably mass produced in China. My husband Peter and I found one quality merchant who was selling the older tribal pieces along with fine Middle Eastern jewelry and artifacts– but no bird sculptures.

Our favorite memories from the trip are those moments seeing the animals on the move in their natural environment. Watching hundreds of zebras, wildebeests, and gazelle making their way across the Serengeti Plain in search of fresh grass and sitting in a boat yards away from massive Hippos, hearing their deep sonorous groans as they submerge themselves underwater and reappear,  is an experience of a lifetime. It reminded  me that wildlife, and the variety of animals we grew up visiting at the zoo,  is not something we can take for granted.  It’s important we  try to preserve the earth  and protect our endangered species that include the Black Rhinoceros and Leopard, both of which I had the privilege to see, albeit from a far distance. (This is when field binoculars come in handy).

Nature and the images  we see, whether they are exotic animals  or the shape of flowers that bloom on the tree outside our window, can inspire the artist in all of us. You don’t have to travel half way around the world to see something worthy of inspiration, but some times taking a journey can give us perspective to appreciate what we have when we return home. 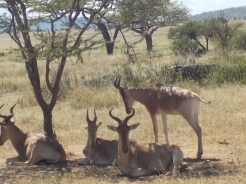