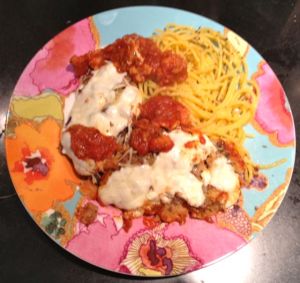 It’s when you actually do the cooking that you are reminded of some important tips when formulating a recipe.  Last night I made the veal parmigiana mentioned in yesterday’s post and I forgot to mention that the fool-proof way to make certain your coating of cracker or bread crumbs sticks to the veal cutlets is to chill them for two hours in the refrigerator after they are coated. This technique works for fish, shrimp, and chicken as well as for veal.

Now if you are wondering why my spaghetti looks so yellow, it is because I used quinoa-corn blend pasta. Quinoa, a tiny grain which has been growing in popularity, was called the “Mother Grain” by the Incas who once ruled a great empire in South America. It has a rich, nutty, flavor. I’ve been experimenting with alternate grains to reduce the amount of gluten in my family’s diet.  If you like your pasta al dente (firm) style, this is a good substitute for semolina pasta. And if you want your meal completely gluten-free, use gluten -free flour (such as flax seed meal), bread, or crackers to create your breading.

For more details about making this recipe, read the previous post.

Nadja Maril is a communications professional who has over 10 years experience as a magazine editor. A writer and journalist, Maril is the author of several books including: "American Lighting 1840-1940", "Antique Lamp Buyer's Guide", "Me, Molly Midnight; the Artist's Cat", and "Runaway, Molly Midnight; the Artist's Cat". Her short stories and essays have been published in several small online journals including Scarlet Leaf Review and Storynews. She has an MFA in creative writing from Stonecoast at the University of Southern Maine. Former Editor-in-Chief of What's Up ? Publishing, in charge of three magazines: "What's Up? Annapolis", "What's Up? Eastern Shore", and "What's Up? Weddings", former Editor of Chesapeake Taste Magazine a regional lifestyle magazine based in Annapolis, and former Lighting Editor of Victorian Homes Magazine, Maril has written hundreds of newspaper and magazines articles on a variety of subjects.. View more posts