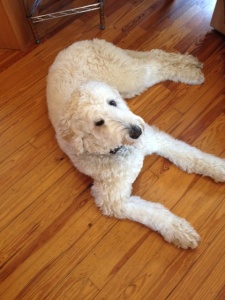 The importance of relativity came across to me physically and mentally, on my many levels this past week.  On a physical level, this new wisdom manifested itself in the size of dogs. That’s right. Dogs.

Last night, having not seen Halo and Leopold, dogs belonging to my son Chris and his fiancée Laura in some time, these previously substantial dogs suddenly appeared small and I had always thought of them as fairly large dogs. They certainly had taken up plenty of space in our home when they had been guests on more than one occasion and we had taken care of them for a weekend.  But compared to my Labradoodle Chloe, they now seem to be “smaller dogs”.  Fourteen-month-old Chloe has kept growing larger and larger. She is now 70 pounds and a tall dog. Twenty-eight inches off the ground, she comes midway up my thigh.  Halo and Leopold have stayed the same in size during the previous year. They now seem much smaller and easier to control when compared to large rambunctious and bouncy Chloe.

My husband Peter and I had been invited to dinner at Chris and Laura’s apartment, and they served us some excellent comfort food that included a winter root mash made from red beets, rutabaga, celery root, and turnips served with a pork loin slowly baked with apples. So where did that term “comfort food” come from anyway? Its first documented use was in the Webster’s Dictionary in 1977 to describe food that evokes nostalgia and relieves emotional stress.  Typical American foods on the list are chicken soup, mashed potatoes, and meatloaf.  Obviously different people have different tastes, so that while one person might find tuna casserole a comfort (I’m not a fan) another person may feel comforted by a dish of Banana pudding (another item I do not relate to at all). Slow cooked meats such as chicken, brisket, and tenderloin, I do find comforting. Just the other week I tried out a roast chicken recipe that required dousing the chicken repeatedly in a rich onion stock repeatedly for several hours, while cooking the bird at 300 degrees and it was quite delicious.

A winter root mash can consist of any root vegetables such as carrots, potatoes, turnips, etc. that grow underground, that are roasted, boiled, or steamed and then mashed. Add a little salt and pepper and butter and you have a delicious and slightly different side dish. Use red beets or purple potatoes and you’ll get a dish that’s really colorful. 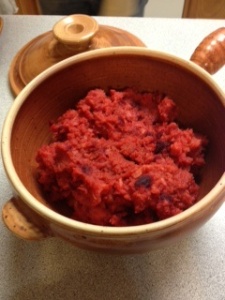 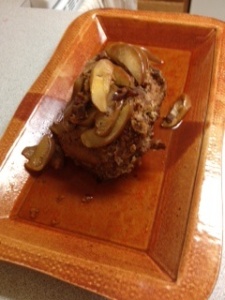