It’s almost October, and you know what that means…almost time for Halloween and maybe time to start thinking about this year’s costume if you plan to go partying. IF I am still stuck inside my clamshell ie Total Contact Orthosis Jacket (TCO) I can easily be 1) a Viking Queen clad in an armored vest 2) A muscle bound store mannekin or 3) a bionic woman. I’d just as soon not be any of those things since I feel closely akin to one of those creature as it is and would deign to be something else, someone who is free of encumbrances. Last year we had lots of fun not only dressing up, but checking out everyone else’s costumes.
What are some of the timely topics and people in the news? Obviously all those political candidates… vying for the presidential nomination, and then there are the disasters— floods, hurricanes, and an earthquake. The national debt? An ipad. The newest royal couple. It’s fun to imagine.
Scary is another way to go because ghosts, goblins, witches, vampires and the like never go out of style. So I suppose I could even use the TCO to be a version of Frankenstein. (Can you tell I really am starting to hate the thing?) In case you don’t know what a TCO looks like, I’m including a photo because it is quite scary in its way. 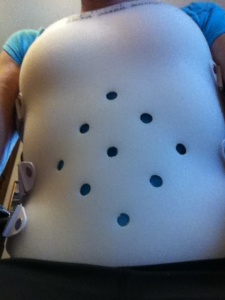 But before we arrive at Halloween, there is an entire month of Chesapeake Beer Madness and the kick-off party is this Friday night. It’s an awesome event, enabling you to taste a variety of local craft brews and prepare you for the upcoming weeks of beer tasting and online voting on the Whatsupmag.com website. Money raised from this event will be donated to charity through the auspices of the What’s Up? Foundation. For more information about the party and the foundation go to http://www.whatsupmag.com/

Nadja Maril is a communications professional who has over 10 years experience as a magazine editor. A writer and journalist, Maril is the author of several books including: "American Lighting 1840-1940", "Antique Lamp Buyer's Guide", "Me, Molly Midnight; the Artist's Cat", and "Runaway, Molly Midnight; the Artist's Cat". Her short stories and essays have been published in several small online journals including Scarlet Leaf Review and Storynews. She has an MFA in creative writing from Stonecoast at the University of Southern Maine. Former Editor-in-Chief of What's Up ? Publishing, in charge of three magazines: "What's Up? Annapolis", "What's Up? Eastern Shore", and "What's Up? Weddings", former Editor of Chesapeake Taste Magazine a regional lifestyle magazine based in Annapolis, and former Lighting Editor of Victorian Homes Magazine, Maril has written hundreds of newspaper and magazines articles on a variety of subjects.. View more posts