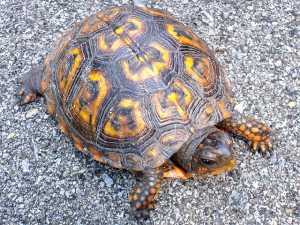 Today I feel like a turtle. I have this thick shell around my middle that seems heavier and increasingly awkward when I attempt to sit in a chair or roll over in bed. It’s a funny thing that now without the cervical collar, officially called a Miami J collar, which prevented me from turning or bending my head, all my focus is on the TLSO brace. I hate it. I have to remind myself several times a day that it is the TLSO which enables me to safely move around while the fractures in my back continue to heal. Plus my shoulders and arms still hurt so I’m at the computer with a heating pad draped on my shoulder. Good times not.
But I did get some hot water beating on my back last night and I was in heaven….who would have thought just a little hot water? We broke the rules and I took a shower, never removing the TLSO brace, mind you, but in the care instructions you are supposed to only get sponge baths. I suppose they imagine people slipping and falling in the shower so I’m not going to recommend this to anyone else unless you have a trusty mate who will stand in the shower with you. Plus theoretically it is hard to get the brace, made of foam and plastic with six heavy straps dry afterwards. We used a hairdryer.
So on this somewhat gray day, I will continue to plod along, and visualize healing. It’s getting hard for me not to act grumpy and impatient although it is probably typical behavior. If you start feeling a little bit better after you’ve been sick, it is frustrating not to be able to do what you’d like to do, such as change the dirty tablecloth in the dining room. So I have to practice patience in a big way, take a deep breath, and tell myself “It’s not that important. Just do what you can.”

One thought on “The Patient Turtle”