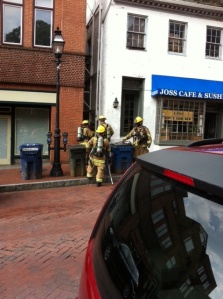 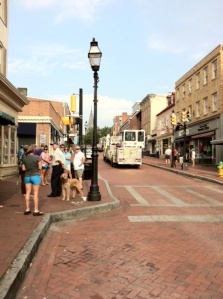 At approximately 9:15 this morning, traffic came to a halt in downtown Annapolis as upper Main Street was shut down due to a reported gas leak at Joss Cafe and Sushi Bar. Fireman suited up with tanks on their backs rushed to the scene accompanied by emergency vehicles, an ambulance and several fire engines. The arrival of so many vehicles blocked traffic around Church Circle. At 9:30 when I was walking by, laden with my purchases from the downtown Farmers’ Market near City Dock, the source of the leak was still being investigated but there was definitely a strong smell of gas in the air.
It’s great to have such a responsive emergency team, but I do think they should have opened a lane around Church Circle for traffic to proceed to Route 50. Just another Sunday stroll in Naptown.

One thought on “Sunday A.M. Main Street Shut Down”