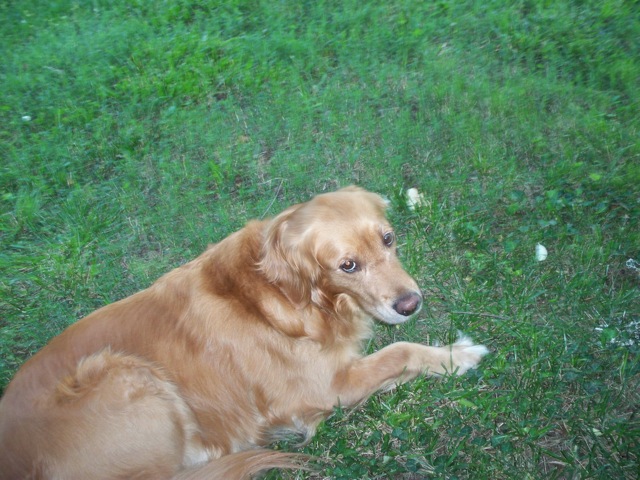 If you’ve been a regular reader of this blog, you’re probably already acquainted with Grace of Naptown. If you’re a frequent walker in downtown Annapolis, you’ve probably met her in person and stroked her soft golden fur. She was a regular visitor to City Dock Cafe and could be seen mornings, around 7:00 a.m. waiting patiently outside while her owners stood in line for their morning coffee. While waiting, she made many friends, and was offered pieces of bagel and muffin which she enjoyed, but she really loved the petting. She loved the attention given by everyone who met her, for being a golden she loved people more than anything else.
Grace has become such a familiar fixture, that if my husband Peter or I were to dare to go out for a walk in the evening, perhaps to go to dinner or the theater– to a place where dogs were not allowed, we’d be asked, “Where is Grace?”
I fear we will be asked that question many times in the upcoming weeks. Grace died on Friday, July 8th. She had a good final week on this earth spending time doing what she loved to do best: walking, exploring the smells of the woods, chasing chipmunks and squirrels, making new friends, swimming in the Bay, rolling in the sand. While it appeared her immediate cause of death was congestive heart failure, we are not certain of the specific illness but suspect it was a swift moving cancer.
Grace, hailed from Berkley Springs West Virginia and was the daughter of Lady and Prince of the Knoll. She gave birth to nine puppies sired by another small Golden Retriever, Augie. All nine puppies went to wonderful homes. One daughter predeceased her, succumbing to cancer. We have many fond memories of the “puppy experience” and I even wrote an article about it for What’s Up? Annapolis in October of 2005, which was enthusiastically lauded as well as sharply criticized by those not in favor of “amateur breeding.” Grace accompanied us to Trick or Treat for Halloween as well as to walk on behalf of the SPCA. One of her favorite hiking spots were the trails at Greenberry Point where she would sometimes attempt to chase after deer. She would sit patiently while small children and toddlers would attempt to pet her and grunt approvingly while being scratched behind the ears and under the chin.
The best dog I’ve ever known, she will be missed but not forgotten.

3 thoughts on “Epitaph to the Best Golden in Annapolis”