The setting was beautiful, although it was a harrowing drive yesterday to get to the waterfront neighborhood of Severna Park where the recipients of this year’s TWIN awards gathered to be feted and to get to know one another better. For those readers who may not know what TWIN stands for, the acronym is Tribute to Women in Industry. It’s an award presented by the YWCA and this year will be the 26th year since the tradition started of inviting businesses with women employees in leadership positions to have them honored for their contributions by helping support the programs and work of the YWCA.
The food, catered by Main Ingredient, was beautifully presented and also delicious and the talk turned to tears as many of the women felt so honored and touched to have achieved the status in their company to be honored with a TWIN award. 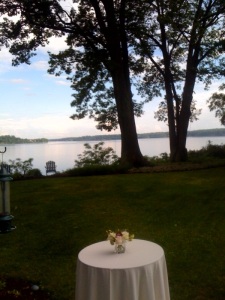 —
I reconnected with some old friends and made some new ones. Several times Executive Director Molly Knipe reminded us that, sooner or later we are bound to be tapped as future committee or board members of the YWCA, so she encouraged us to think about what we might contribute in the way of time and talent to the YWCA.
The big TWIN gala event open to the public will take place on Thursday, June 2nd at the Sheraton Annapolis Hotel and the proceeds will support the core mission of the YWCA in assisting victims of domestic violence and improving the lives of women and children residing in Anne Arundel County. Did you know that one in every four women will become the victim of domestic violence? From counseling and classes to a telephone helpline, the YWCA has been consistently helping women who were victims, begin new lives.

Tickets are on sale now for $65.00 per person and can be ordered online at http://www.annapolisywca.org and clicking on the TWIN link or calling 410.253.0871.
Tonight I’m going to see Pygmalion by George Bernard Shaw, one of my favorite plays, at the Everyman Theatre in Baltimore. Look for my review posted on the whatsupmag.com website on Monday May 23rd. The performance will be running through June 19th. The storyline was the inspiration for the Broadway musical classic, My Fair Lady. Shaw was always perplexed by how English language was butchered by just about everyone… now if he lived today, he’d be even further perplexed.
Tomorrow Bridges Restaurant in Grasonville on Kent Island will be celebrating their one year anniversary. Time passes quickly when you are enjoying good food, especially when the warm weather arrives and you’re looking out over the Chesapeake Bay. There’s lot of great events this weekend including the Blues Festival, so check them all out at www.WhatsUpMag.com