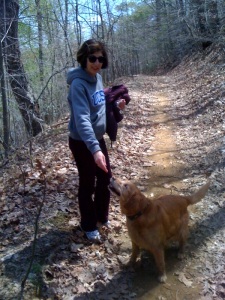 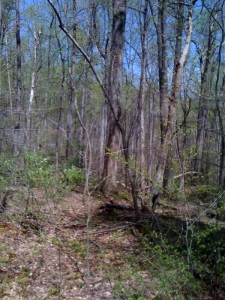 The sky is always a beautiful shade of blue when the sun comes out after a storm and that was certainly the case yesterday at Bacon Ridge natural area. It was Walk for the Woods 2011, and with the easement preservation of Bacon Ridge, a total of 2000 acres are now being conserved in Anne Arundel County through the facilitation of land conservation easements, the result of hard work on the part of the Scenic Rivers Land Trust.
These were not groomed trails, being a combination of logging roads and paths marked with pink, green or yellow tags, so the going was sometimes slippery and bumpy, but the vistas of trees were beautiful. Many bird watchers were on the scene, armed with binoculars and long range lenses on their cameras. A few hardy souls who had walked the trails on the rainy Saturday returned on Sunday with high rubber boots. Yes, there was a lot of muck and my almost new cross trainers are now a dingy shade of gray, but our golden retriever Grace had a fine time. Maybe in the next day or so we’ll squeeze in the time to give her a much needed bath.
Currently access to the Bacon Ridge Natural area is off of Marbury Road near the old Crownsville Hospital on Crownsville Road. The trails are not currently regularly open to the public but eventually citizens will have access through the county park system. It’s a lovely addition to several wonderful spots in Anne Arundel County to take a hike.