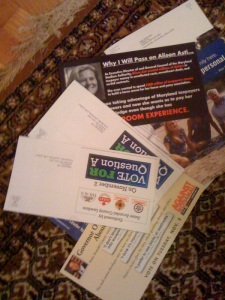 Finally the end of campaign litter is in sight! I voted two weeks ago, but the glossy leaflets and postcards have continued to jam up my mailbox. Do politicians really think people read the quantity of campaign gibberish they’ve been sending us? I don’t even want to talk about the phone calls.
The good news is, it will be over soon. The Democrats will have to lick their wounds, and as for the Republicans– once they gain more power, will they really do any better job of repairing the economy?

One thought on “Voting Day Means No More Junk Mail”